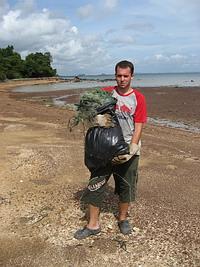 So we are already into November and it’s time for me to report on what the volunteers have been up to last month. In mid October we had a week of spectacular diving with a Leopard shark, a Hawksbill turtle and a Whale shark being spotted on consecutive days, and towards the end of the month we all packed our bags and went on a three day trip to Khao Lak to clean some of the beaches in the Province of Phang Nga.

As the Khao Lak trip is where I left off last month, I’ll begin with that. Though the principal aim was to clean beaches, the trip was a good opportunity to show the present volunteers a wider view of Thailand and impress on them the enormity of the 2004 Indian Ocean tsunami as Phang Nga was the province that was hit the hardest, with whole coastal communities being practically wiped out. Despite the constantly miserable wet weather during the whole trip, we managed to clean three beaches, collecting 460kg of rubbish, of which shoes and polystyrene were the most numerous items by a long way; there were hundreds of shoes and sandals found on each beach, along with incredible amounts of environmentally damaging pieces of polystyrene which, as they get eroded, break into tiny white balls which fish and other marine animals can then eat and consequently suffer painful deaths. As the south westerly monsoon has not quite ended it was the perfect time to clean these beaches; in a couple of weeks much of the rubbish we 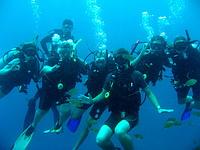 collected, which over the last few months has been washed up on to the shores, will be washed out to sea potentially causing even greater damage to the marine environment.

As well as cleaning these beaches, we also took a trip to a beautiful stream in the jungle. Here we spent an hour or so cleaning the path and river banks of rubbish before taking a deserved dip in the cool, clear, refreshing waters – a good way to end a day of cleaning, especially with the added bonus of rocks to jump off, rapids to be washed down and frenzied fish to feed. On the way back to Khao Lak we took a detour to have a look at a couple of fishing boats and a Police patrol boat that had been washed far inland during the tsunami and were too large to remove from where they were dropped – a truly 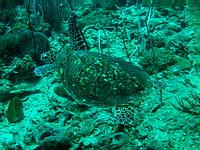 impressive demonstration of the power of the waves though a shocking reminder of the tragedy of the event.

Continuing with beach cleans, we also went to three beaches near Ao Nang earlier in the month – Ao Thung, Lam Pho and Andaman Beach. The first two were particularly dirty and we somewhat unbelievably collected the same amount of rubbish from each one: 244kg. Included in the finds here were a lot of tiles, a lifejacket, a jack (actually a monkey) in the box, large amounts of clothes, 20 batteries, an oil canister and 3 tires of varying sizes. The total figure for rubbish removed from beaches and jungle stream amounts to 1114.4kg which is the second highest monthly total of the year, so well done to all those involved. 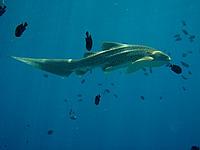 As well as cleaning beaches, we spent one day on a longtail boat heading up river from the longtail harbor at Noppharat Thara collecting any rubbish spotted on the way. A huge amount of glass was found at one site, which pretty much filled all 31 bin bags that had been taken on the trip and weighed in at 215kg. Whilst cleaning, volunteers observed juvenile Pipefish amongst the mangroves and a Sea eagle flying overhead.

With all this dedicated on-land cleaning activity, and due to the fact that most of the volunteers have been going through dive courses, there haven’t been that many reef salvage dives. In fact, there were only three specific ones in October at Koh Yung, Ao Nui and Losama Bay where 9.1kg of debris was collected. However, now that we have a few more advanced divers I am wanting to make a trip to Mu Sang Nua to see what has collected there over the last few months when the weather has prevented us from going there due to its exposed location. From experience it is a reef that often has huge amounts of fishing net covering it so a clean up mission is most probably due – let’s hope the weather allows us to go in the next couple of weeks.

As I said at the beginning of the update, we had a glorious week of weather where the underwater visibility was superb so we took full advantage of this and went to dive sites we had not been to for some time such as the King Cruiser wreck, Shark Point, Anemone Reef, and Bida Nok. The rest of the month has not been such great visibility but despite this, we have ploughed on with training the new volunteers in fish identification and reef survey methodology so that we now have a group that are ready to carry out regular surveys, both Reef Watch for Phuket Marine Biological Centre and more extensive fish surveys for our own records – those involved are definitely looking forward to this whilst others have chosen to go down the route of gaining further dive qualifications such as Rescue, First Aid and even Divemaster.